Every year, around this time, I have a little more fun than usual with the blog and try to predict who is going to cut their career short by showing up in an inappropriate work Halloween costume. For me it is a way to have a bit of fun, and at the same time, open the kimono just a bit so and give you the reader that HR / manager insight that won’t be publicly acknowledged until it is too late.

This year is no different and I am excited to see what creative work Halloween costumes will show up. If you have ever thought that there is no way your VP will notice you, than October 31st is your opportunity.

I have seen many average Joe’s bust out of obscurity in the corporate world. They were able to do this because they came up with an ingenious costume which got them noticed by upper management. The ingenious work Halloween costume got Bobby No Name noticed by a higher up, which turned into a few hello’s in the hallway. With a little luck and reputation for good work an idea was not just pitched but listened to with an open mind and mentorship. It wasn’t Bobby No Name’s Excel or presentations skills, it was his imagination with his work Halloween costume that got him noticed.

Of course, I have also seen a number of Billy Bob’s commit career suicide by coming in with a work Halloween costume that may have been ingenious, but completely inappropriate for the corporate culture. Execs are left shaking their heads, direct managers are embarrassed, and co-workers are left whispering in the bathroom. If only these dumb-asses spent this much effort thinking about an idea that would help the business.

Work Halloween Costumes are one my guilty HR pleasures.  Up there with interviewing an eager young co-ed, delivering a pink slip to the office bully, and my personal favorite: reporting a 20% lower yearly salary than the actual on a punk-ass employee when asked for a reference check.  These are all things I obviously won’t admit to publicly, but behind a mask and dark glasses, I will be the first to say, I am only human.

As an HR Professional, I won’t publicly admit that I care for the crude and tasteless work Halloween costumes. Deep down, I enjoy walking around the building and seeing the employees and all of their company spirit (I mean freak shows ) while taking mental notes. I repost this particular blog every year around Halloween, and every year I change it up a bit.  I can’t help myself when it comes to sharing this because it’s so much fun to predict what celebrity or meme will inspire an inappropriate work Halloween costume and what employee will commit the CLM (Career Limiting Move in HR speak).

Getting drunk at the company holiday party and getting drunk and rolling a golf cart at the annual company golf tournament are two. Of course the inappropriate Halloween costumes.  In the same way that Santa is busiest on Christmas Eve, HR is usually busiest on 2 special days during the year – the day after the company holiday party and Halloween.  If a company doesn’t have a people problem every once-in-awhile, I am out of a job.  Thank you, Baby Jesus, for the dumb-asses and their work Halloween costumes.    Don’t get me wrong, I am all for team building, and work Halloween costumes build teams very effectively.  The great part is that teams don’t even realize they are bonding and that is “Nasty” at it’s best.

I love it when a department dresses up in a theme because it shows they banded together, agreed on a single mission and worked as a group towards a common goal, and if that isn’t HR speak, I don’t know what is!  It can be as simple as the Men in Black theme or as elaborate as the crew from the Starship Enterprise (usually technical departments).  This year, a couple of team-building themes a department could dress up come to mind very quickly and with facial hair so popular this year: 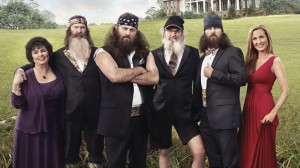 Completely acceptable for the workplace

Just leave the firearms at home

I struggle internally when a department comes dressed as “Pimps and Ho’s”. At least they still banded together like a team on a single mission.  I don’t have kids (and won’t admit this publicly), but it is pretty cool seeing the little crumb snatchers come to work with their parents work in their little kitty costumes. Parents and children in a matching theme are the best. Curious George with the Yellow hatted Cowboy comes to mind. This is a hip VP of BizDev I had the fortune of working with. 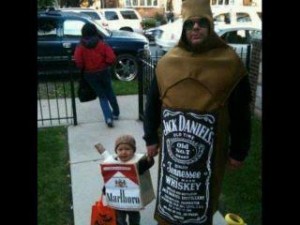 Pushing the envelope but hilarious but I gotta give the nod!

Call me the Grinch who stole Halloween, but to me, this simple gesture is an HR “tell”.  When parents bring the little kiddies to work, it is a subconscious sign that the parents like their job.  If they hated the place, they would treat the office like the home of a sexual offender.

There is always the employee that needs to push the envelope when it comes to inappropriate office Halloween costume. Unless it is Elvira sporting cleavage with a short skirt and fishnets, I am probably not going to be amused. Elvira might be able to get some work done. Unfortunately, the productivity of the folks around her will be like her costume, minimal.

For those considering coming to work in your grubbiest, most unprofessional clothing, this is probably not a good idea.  This is Halloween not “Casual Day” and even Casual Day is not Grubbies Day.  This is the worst form of costume abuse in my opinion. Office Halloween costumes come in all shapes and forms.  In the same way, drunk behavior can be a reflection of your true self, (mean drunks and friendly drunks) HR will interpret your costume as a direct reflection of how much respect one has for their customers and co-workers. It is also a reflection of how much professional awareness you possess.  It’s all about judgment. For me, it will be lights out and extra “Beware of Dog” signs posted in the front yard this Halloween evening.  Anything to avoid the crumb snatchers.

How an inappropriate Halloween costume cost an employee their job